In the often dizzying rush of urban life, it can be a challenge to pause and admire all the beautiful little details of the city around you. Some of our largest cities are home to centuries of rich architectural detail, surprising nods to the popular culture of their times and in some cases, clandestine creations. From labyrinths and unexpected Picassos to underground crypts, our gateway cities are just full of surprises!

The powerful buildings of our nation’s capital – its governmental and court buildings, monuments and museums –  have gone through many iterations since its early beginnings in 1790.

Washington, D.C.'s most influential buildings – like the White House, US Treasury building, the US Capitol, the Executive Office Building – were constructed piecemeal over the next 100 years by multiple notable architects. As a result, its famous buildings reflect a number of international styles, including Gothic Revival, Neoclassical, Beaux Arts and Federal. 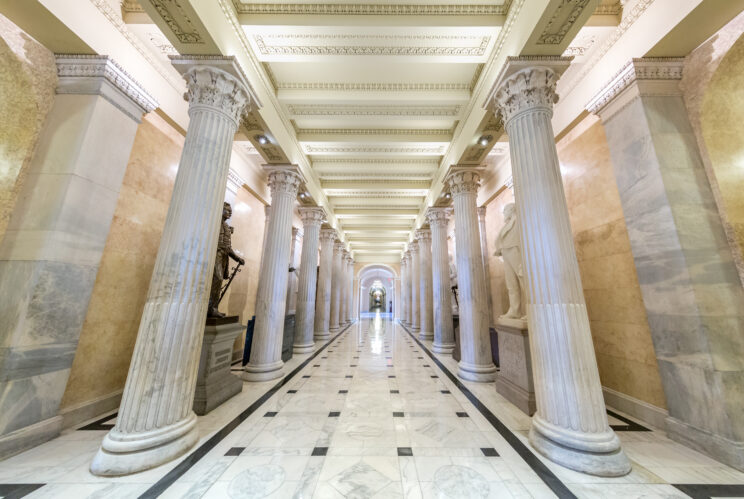 A crypt lies under the Capitol. Credit: Getty Images

By nature of these influences and the consequential character of the projects, architects fit in a number of clandestine features. For instance, within the basement of the U.S. Capitol, a crypt contains a replica of the Magna Carta. It was designed to be the center point of the district, and the point from all streets in Washington stretch outward. It was also intended to be the burial place for George Washington, but he specified to be buried in Mount Vernon instead.

Meanwhile, underneath the Georgetown University, a notorious labyrinth of tunnels run under the campus, connecting most of the buildings. Student explorers are known to sneak in, sharing stories of hidden rooms and passageways. The tunnels are reportedly a meeting place for Georgetown’s alleged secret society, the Society of the Stewards.

One of America's oldest cities, Boston's roots and enterprising attitude has influenced its buildings and destinations. It's home to one of the skinniest houses in the United States, a four-story, ten-foot wide townhouse aptly called Skinny House. Legend has it, the Skinny House originated because of two feuding brothers. When one of the brothers returned home from the Civil War, he found his brother had stolen his property inheritance by building a large house on the lot. So, he built this spite house to block his brother's sunlight and views. The strikingly petite home hit the market this month, asking $1.2 million. 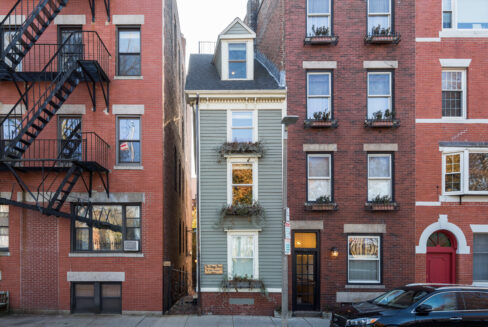 Next, travel back in time for a taste of what Boston’s Prohibition era must have felt like, by visiting one of the city’s hidden speakeasies. By the height of the Prohibition, the early 1930s, Boston had 4000 illegal speakeasies and was nicknamed Bawdy Boston. Down a small alleyway in an unmarked building sits Brick & Mortar, a modern cocktail bar that prides itself on being hidden.

Before San Francisco was the world’s tech capital, it was a center of maritime commerce and the capital of the California Gold Rush. Now, modern developments sit nearly elbow to elbow with its iconic Victoria architecture, dating back to the mid-1800s. Look closely at San Francisco’s Victorian buildings and you’ll see them replete in symbols. Wealthy San Francisco residents of the 19th century typically used these symbols to communicate their social standing, their values and superstitions. For instance, dolphins represented charity and love, Medusas protected against evil and swallow’s nests represented rebirth. 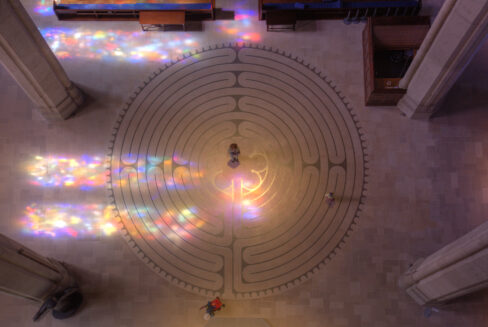 Additionally, Grace Cathedral offers other surprising and esoteric details. Its labyrinths are lesser known outside of San Francisco. With roots dating back to the California Gold Rush, Grace Cathedral burnt in 1906 and later rebuilt to include two labyrinths, indoors and out.The mazes replicate Cathédrale Notre-Dame de Chartres, a prominent medieval labyrinth in Chartres, France. Visitors walk the winding paths to enter a meditative state.

Meanwhile, if you’re ever inside the Castro Theater, the 100-year-old movie palace, be sure to look up and witness its exceptionally rare ceiling. It appears to be made of leather. In actuality, an interior design technique considered lost today is responsible for this “leatherette” effect. It’s the only ceiling of its kind left in the U.S. today, and one of the last in the world. 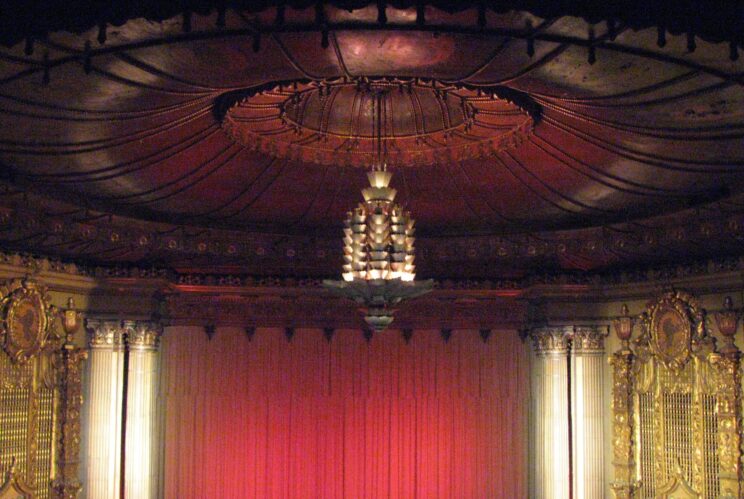 Arguably one of the most unique pieces of architecture in Los Angeles are the Watts Towers. It holds the honor of being the world's largest single construction created by a person. Its builder, Simon Rodia came to California in 1921, after emigrating from Italy to the U.S. in the late 1800s. He was obsessed with building out Watts Tower, spending 33 years of his life to create 17 steel structures sheathed in mortar and decorated with glass mosaics, shells and clay. "I wanted to do something big, so I did," Rodia said of the project. Now, Watts Towers are synonymous with a namesake arts center that offers cultural enrichment programs and supports local artists through regular exhibitions. 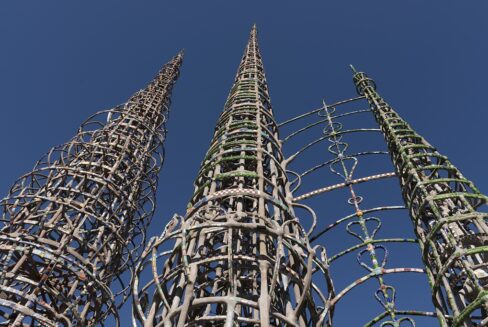 That tallest of the Watts Towers reach 100 feet. Credit: Picryl.com

What do you know about Googie-style? You've probably seen examples of this futuristic in photos of Los Angeles, but maybe haven't heard of the art style by name. Widely considered Southern California's signature architectural style, Googie came into being in Los Angeles around the 1950s, in celebration of the Space Age. Swooping lines and neon colors, reminiscent of the Jetsons, characterize Googie style. Just over a dozen commercial buildings still exhibiting Googie style can be found around Los Angeles, including diners, gas stations and the country's oldest McDonald's. 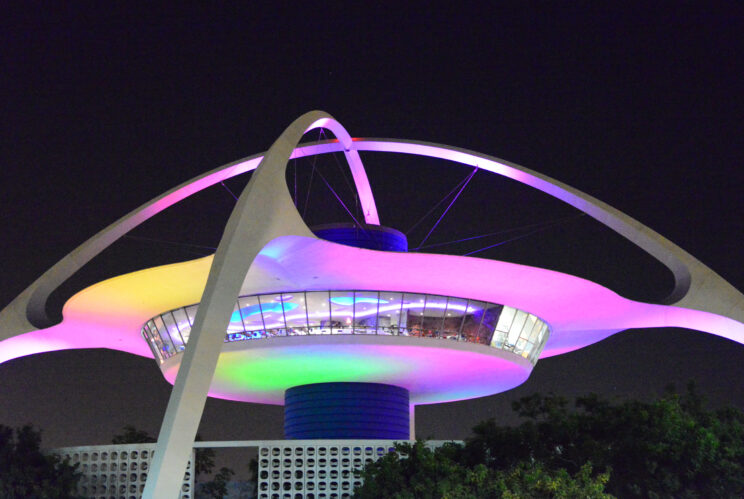 A well-known highway stretching along the Chicago River in the city's Loop district, Wacker Driver has both an upper and lower level. But it also has a more clandestine road, Lower Lower Wacker Drive, a catacomb stretch of eerie infrastructure originally intended to service trash collection from commercial buildings. Located two stories under Chicago's streets, Lower Lower Wacker is known for being eerily quiet and disorienting. 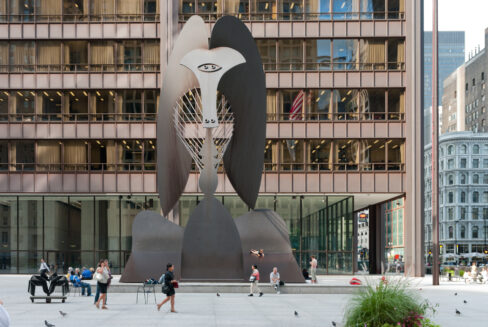 Chicago has its own Picasso. Credit: Flickr/Dan De Luca

In one of Chicago's busiest plazas, an authentic Picasso sculpture looms high above the activity below. Standing fifty feet tall and weighing 162 tons, the Spanish master presented the untitled Picasso the city of Chicago as a gift in 1967. Although its cubist form was not initially well-received, it has become one of Chicago's most revered sculptures. As Picasso declined to name the monument, or describe his inspiration, a number of theories surrounding its meaning abound.

Last but not least, New York City. Countless books have been written about its many architectural secrets and quirks, but a special few are worth highlighting.

To start, did you know that the trademark red Macy’s shopping bag at the corner of Herald Square hides a five-story building? The corner property resulted from a competition between leading department store owners Rowland H. Macy and Henry Siegel. In the early 1900s, an associate of Siegel’s attempted to thwart Macy’s planned expansion by purchasing the building and presenting Macy’s with a buyout offer. Instead, Macy’s built around the property and later leased its exterior for the bag-shaped advertisement. 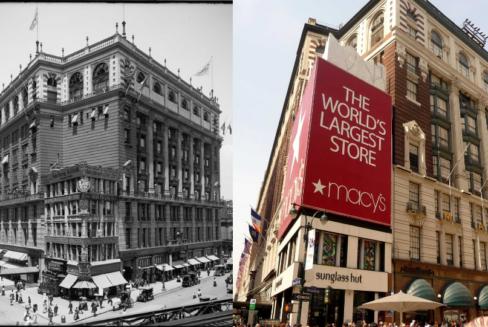 Onto another New York City icon: Radio City Music Hall. There's a secret, golden apartment within the famed concert hall, constructed as a gift for Samuel "Roxy" Rothafel. Rothafel developed a number of Manhattan's early movie palaces and theaters, including Radio City. Highlights of the apartment include 20-ft. high, gold-leafed ceilings. Although nobody lives in the space now, it can be rented for lavish private or media events.

Lastly, another golden secret sits 50 feet below sea level and rests on Manhattan bedrock: the underground gold vaults of The Federal Reserve Bank of New York. As of 2019, the New York Fed’s basement vault held 497,000 gold bars weighing a total 6190 tons. None of the gold belongs to the Reserve. Rather, it keeps custody over the gold on behalf of central banks, international organizations and governments around the world.

As our roundup shows, there's no shortage of secrets swirling around you in some of America's most famous cities! The creativity, culture and history of urban architecture is just one of the many facets that make city life so captivating.