The Pippins of Charles Norton: Visionary Perspectives on Society

The singular legacy left behind by the late Charles “Charlie” W. Norton is on vivid display this month at High Line Nine, in a poignant exhibition of creative genius with salient societal messages. “The Pippins: Dilemma of Colors” centers around the Pippin character, recast by Charlie as a lens through which the ills of society can be examined and explored.

Historically, Pippin was the hunchback son of Emperor Charlemagne. He was outcast and sent to a monastery for trying to assassinate his father. Described by art scholar Shai Batel as “torn between his position of comfort and influence and the ambitions he had to exceed his father’s expectations,” Pippin would resurface in popular culture as the protagonist of Stephen Schwartz' 1972 musical, becoming “a parable for the existential ambivalence of privilege."

Charlie’s take on the Pippin is a modern rebuke of injustice in all its forms, from racism and violence to his perceptions on the ambivalence of privilege, of luxury-dipped lives agnostic to others' plight.

Richly detailed in color pencil, the Pippins are also a contemplation of his own status in life. Charlie enjoyed a cultured, cosmopolitan upbringing, attending fine arts and educational institutions in exotic places like Bali, Singapore, and Aix-en-Provence, France. He was deeply affected by the inequity he saw in the world. Unfortunately, he was linked in fellowship with that plague of a great many artists and suffered from bouts of deep depression. In his works one can sense the dark, dry humor through which he braved the world.

Running through November, the exhibition of 57 Pippins and 21 corresponding poems shows Charlie’s artistic breadth. Even more powerfully, the display will benefit mental health awareness. All proceeds from the exhibit will go to Project Healthy Minds, a millennial/Gen Z-driven nonprofit that develops anti-stigma campaigns and provides mental health resources.

Marred deeply by his depression, Charlie took his life at the age of 24. But through his Pippins, he has left us plenty to contemplate.

The profile of each Pippin is the same. Sitting on a chair with eyes staring straight ahead and legs crossed, each Pippin faces forward, presenting a pleasant outward appearance. One hand reaches forward in a thumbs-up. However, one hand is held back, displaying a middle finger. It’s the dichotomy that Charlie felt and saw within the world. As Batel writes, “This speaks to Charlie’s own virtuous world view of having to maintain an outwardly sanguine demeanor while feeling constantly, unrelentingly appealed with the state of the world.” 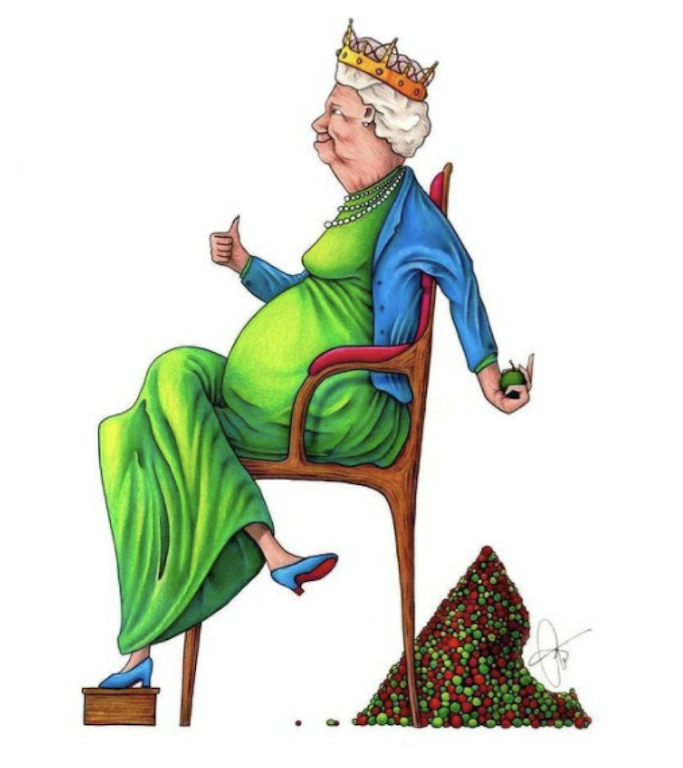 Strong use of satire, caricature and theater are employed throughout his art. As an example, consider “The Queen,” and Batel’s analysis.

“The Queen... is sitting comfortably in an upright chair and taking away from what looks like sweet treats. The British royal family has long been criticized for collecting tax money while not really doing as much for the people’s welfare. Charlie’s philosophy of highlighting the disparity between the privileged and the needy can be seen here clearly and while the leaders are still at their zone of comfort, they show their middle finger at their back and twist their comfortably put other leg at a kicking position perhaps resembling the disrespect they show toward the responsibility of their status and function.”— Shai Batel

A truly insightful and resonant experience, “The Pippins: Dilemma of Colors” provides the viewer with a slew of characters who act as both allegories for the world around us and mirrors of our own internal traits.

Don’t miss this amazing introspective at the High Line Nine Gallery in Chelsea, running November 4 through 30.