The largest work ever produced by the prolific Uruguayan abstract-expressionist painter Vicky Barranguet is a set of three painted panels, each spanning 150 meters (about 500 feet) long. The works are are currently installed in the Galleria Vik Milano Hotel in the famed Galleria Vittorio Emanuele II in Milan, where they span long corridors on the second floor of the hotel, creating an immersive experience for all who walk down it.

Thankfully – in these times when traveling abroad is difficult – you do not have to travel all the way to Milan to see work by Barranguet. In fact, you don't need to leave New York City to see Barranguet herself; she is currently painting at the High Line Nine gallery in West Chelsea, where she is one of five artists to take part in the ongoing artist-in-residency program. Produced in conjunction with Sugarlift, a marketplace that allows you to buy directly from artist's studios, this residency program provides an opportunity for visitors to view the artists at work, and easily purchase their pieces using a QR-code located right outside the space.

At a recent virtual "Lunch & Learn" talk and studio tour for our residents, Barranguet spoke about her process, her collaborations and why she agreed to the Galleria project.

"I always say yes," Barranguet says with a laugh, "I believe the limits we set for ourselves are mainly inside our head. I started doing these long pieces because I wanted to go beyond the limit, beyond the limit of the canvas."

Certainly Barranguet works do seem to leap beyond the canvas. Her paintings are gestural and vibrant; you can practically feel the lines and the colors moving when you see her work. This is not completely surprising as she studied under none other than the masters William Scharf and Larry Poons at The Art Students League of New York, but she brings her own energy to them, and a real elegance and grace to a style of art that can sometimes seem frenetic. 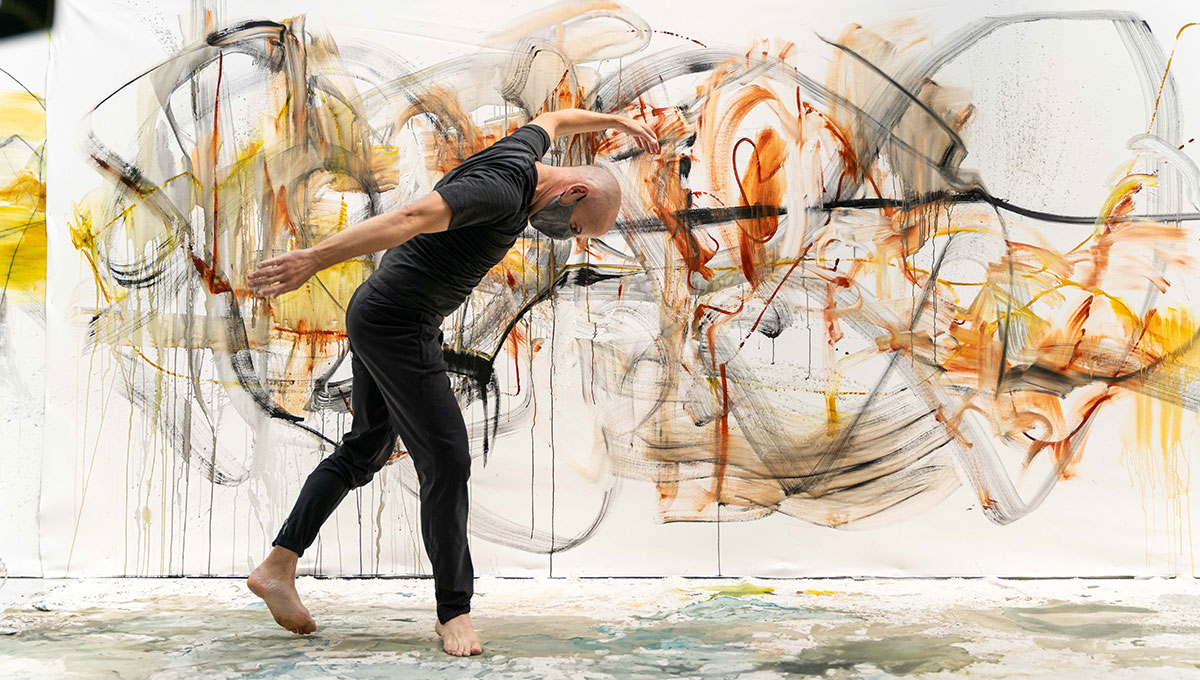 Barranguet attributes this style to her close relationship with music; her husband is the Latin Grammy-award winning composer Gustavo Casenave, and she says she often paints with music playing in the background.

"I let the music guide me. It’s kind of a dance, I’m not dancing, definitely, but the painting is dancing in a way. It repeats itself when there is rhythm or the lines flow through the canvas in different ways depending on what’s going on in the music."

Barranguet has even painted in collaboration with musicians, in shows she puts on on front of audiences, and she has also worked with the choreographer Brian Brooks, who filmed a series of videos while dancing as she painted.

At High Line Nine, Barranguet continues to collaborate – in a sense – with those who come to view her work through the glass wall, and she says she has been remarkably productive in the space – perhaps a little too much so.

"I always create multiple pieces at the same time, but here I am going a little crazy because I have too many," she says, gesturing to the works. "It's such a beautiful space, I want to make the most of it."

Barranguet's work will be on display until August 29. Check out her work and the other four artists' work at High Line Nine, which is following the latest guidelines from local, state and national public health authorities on six-foot social distancing and face coverings. You can also purchase their work here.

Plus, check out Barranguet's full discussion and gallery tour below.