Once a fringe concept, NFTs have entered the public lexicon. Though currently associated with the art world, the reality of NFTs is much more complex. And according to experts, it has years to go before its potential is fully explored and understood. New avenues, applications and development are underway as you read this piece.

Short for non-fungible token, an NFT is essentially a piece of technology – it is a line of code that is used to prove authenticity and ownership. This line of code can be applied to anything, and unique, one-of-one digital art pieces have become its first foray. An NFT lives on the blockchain, which is the decentralized digital ledger that records digital transactions (such as cryptocurrency trades).

The concept of the code is that it is for non-fungible items, that is, things that cannot be replaced or found elsewhere. For example, the Mona Lisa is non-fungible, as there is no replacement for it. But a $5 bill is fungible – it can be replaced with five $1 bills.

Interest in (and demand for) NFTs keeps climbing. Sales of NFTs in the third quarter of 2021 totaled $10.7 billion, a figure eight times greater than the prior quarter, according to reports. The market’s roots trace back to 2013, but grew more widespread by 2017, when a number of unique art collections had been released.

“We went from basically nobody knowing about NFTs to a multibillion-dollar industry and everybody wanting solutions right now,” said Sean Bradford, a co-founder of The Mynt, a lab for NFTs that is dedicated to educating and building community, helping to develop roadmaps for future applications, and producing both immersive and Metaverse-based art experiences. “There’s a term in the crypto and NFT space called ‘do your own research.’ It means, take what you learn and keep looking out for these moments, because it is all going to happen in real time; it is being built around us.”

Amid such skyrocketing interest in this nebulous concept, The Related Life hosted an NFT-themed Speaker Series for residents at High Line Nine gallery in Chelsea. During the event, Bradford described the basics of NFTs before answering attendees’ specific questions.

The Basics of Trading NFTs 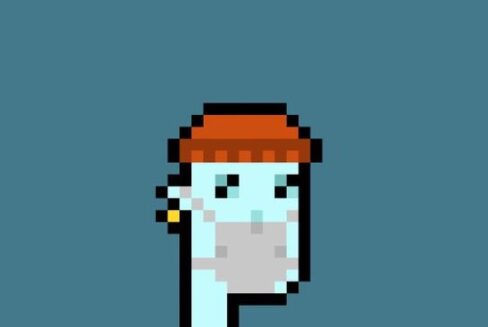 Part of the Cryptopunk NFT series, "Cryptopunk #7523" was purchased by Draft Kings shareholder Shalom Meckenzie for $11.7 million. It was sold during a Sotheby's auction. Sotheby's launched an NFT marketplace in October 2021. Credit: Shalom Meckenzie.

Currently, NFTs are purchased digitally using cryptocurrency. The record of that transaction flows through and is recorded on the blockchain, but the NFT itself (and your cryptocurrency) is stored on a digital wallet called a smart wallet.

Because NFT art assets are so finite and unique in nature, investors are buying them as collector items, spending tens of thousands to millions of dollars. That value is derived from scarcity.

That surge has been a boon for artists, however, because the recorded transaction of a trade comes with its own contract, which can include rules governing future sales. And that means artists can earn repeat royalties.

“Each and every NFT that is traded, that transaction is written to the blockchain as a smart contract,” said Bradford. “Basically, it is a line of code. To prove authenticity and ownership of the asset, this code has a smart contract, which has certain variables locked inside.”

Because blockchain is a trustless system, a smart contract acts as a public ledger. All the transaction history from the inception of that NFT is written into the blockchain, so its path of ownership can always be traced.

“The smart contract dictates what happens, so the creator has input. The creator can write into the code, ‘I will get 20% of every sale in perpetuity for this piece,’” said Bradford. “That means when you sell it again, you get 80% and the creator gets 20%. That can be built in because you’re sewing things with code. And what’s possible with code is huge.”

Speaker Series attendees were extremely interested in the potential of NFTs to stretch far beyond the art world, and asked questions about specific industries. 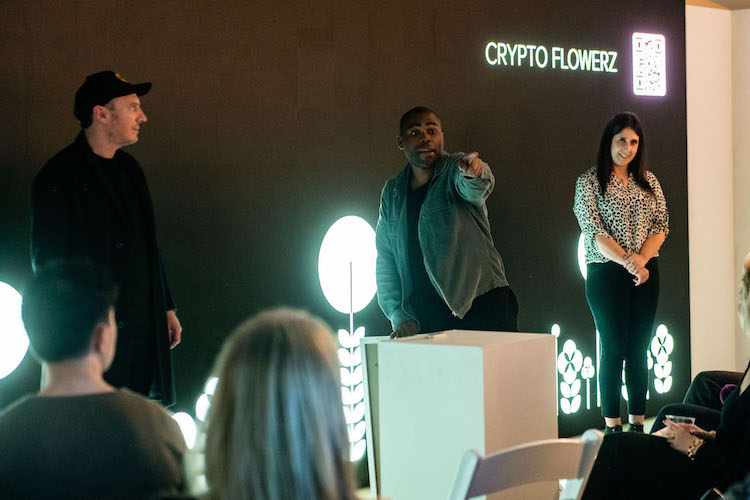 Bradford shared the following potential applications currently being explored, though this is by no means an exhaustive list.

Music and Video Production: “The music industry has only solved for big labels and big stars. You have to get to that level to have more control of your Intellectual property. Through NFTs, artists can collaborate with other artists and make pieces in which they collectively share the revenue stream.

“Even with a video, as a director you are not getting the full cost paid for a video. There’s catering, there are dancers and label fees, there are makeup artists. With an NFT, it is easier to include everyone via compensation rules coded into the contract.”

Books: “This is interesting because you have a one-of-one that is made into other copies. The intellectual property is singular and there are physical copies of the story that go out. You have to decide how you want the audience to interact with it. You could make your own website where people sign up and there are a certain amount of NFT copies of your book sold. Or maybe you sell chapters or pages as NFTs. There is a really interesting project called lostpoets.xyz that is experimenting with this.”

Medical Records: “With NFTs, you can collect ownership of all of your medical data and store all those records together in one place. These kinds of situations are not for monetary value but for convenience. You can even transfer ownership of the medical files to your children.”

Arguably the most intriguing aspect of NFT technology is that it is still in its infancy. Since its use-cases have still not been discovered, it remains highly unregulated.

“Best-practices at this moment are up to the individual,” Bradford explained. “We are so early that there is no regulation, things aren’t built out – the different cryptocurrencies are not talking to each other. But those solutions are on the way. At some point, these blockchains will talk to each other.”

Bradford continued, “Right now there’s a lot of legal risk, but lots of people are working on this in the background, working on multichain solutions and how to take assets from one crypto blockchain and bridge it to another. Because as a collector, if you have assets in two different blockchains, that’s not really helpful. If they can’t speak to each other, how are you going to display them in your house? How are you going to use them in the ways that you want?”

It’s no surprise this past year saw a proliferation of law firms opening divisions dedicated to NFTs.

“If you could do anything in a world where you have the ability to put things on a blockchain and share them, what do you want to do? Its public record,” noted Braford. “What happens if someone steals your NFT? That’s an issue with a resolution we haven’t seen. There haven’t been any cases in court dealing with this. There’s talk about it and lawyers are talking about what’s going to happen and how are we going to regulate securities.”

An offshoot of developing new legal and regulatory frameworks is that they won’t be uniform globally.

“America is very different than Europe,” said Bradford. “Europe is very much regulated for innovation and their prime goal in this whole situation is to not stifle innovation. What Europe does might look very different than what America does, especially in terms of intellectual property.”